Wave shield and Xbee summon talking spirits from the ether(n

Post here about your Arduino projects, get help - for Adafruit customers!

Please be positive and constructive with your questions and comments.
Locked
2 posts • Page 1 of 1

Wave shield and Xbee summon talking spirits from the ether(n

In wanting to reduce the amount of yelling across the house and number of trips up and down stairs to find, inform, or otherwise task family members, I use Arduinos, Adafruit Wave Shields, and xBees to deliver verbal messages remotely on my behalf instead. Along the way during its construction, things got a little out of control and now the k1tchen appl1ances, doorbells, and even the breakfast table participate in the ethereal conversation using not only Wav file audio, but now SMS text messages to the cellphones of intended recipients as well.

The centerpiece of the Private Area Network (PAN) consists of a Box built to classical ratio-metric proportions housing arduinos, xBee, and Wave shields behind back-lit smoky plex panels in its lid and base. I refer to this PAN manager under the shameless portmanteau PANdora Box.

The PANdora Box can send one of 16 messages selected by the brass knob connected to a rotary encoder in the center of the base section. The smoky plex allows the various parts within to be seen, aided by an LED strip light of variable color and intensity, and mirrors on the interior walls. Wacky button sounds are played by the Wave shield as the user rotates the brass knob through each message. Pressing the brass knob instructs an Arduino to send the selected Wav file name across the PAN to the remote listeners which then find and play the Wav file, with, or sometimes without, a preamble. The preamble can be selected from a list appropriate to the message, such as creaky doors, or impersonations. The message itself is usually something useful (but not always) like Kids, please take out the garbage.

Over time, the number of devices sending messages has grown, with each sender developing a unique personality. For example, the Wav files associated with the doorbell are manic depressive in nature, randomly jumping between deliriously happy at the arrival of a visitor, to dreadfully worried as if the visitor could be, say, a process server. The Wav files associated with the oven are openly derisive of the user's baking skills, and is consequently adorned with a warning label accordingly. The breakfast table speaks from a portfolio of sound effects to punctuate whatever might be under discussion around the table. For example, if one of the kids is describing his/her driving lesson that day, the table, possibly under guidance from the spirit world, or more likely via a hidden keyboard by the head of the table, might impertinently recreate the sound of two cars crashing into each other.

A link between the PAN and the Internet is accomplished through an Arduino and WiFi/xBee combination which I call the Netifier. When the Netifier detects a file name being sent by one of the other xBees over the PAN, it sends an SMS message to the intended recipient through a GET request to PHP code running on a remote server. Similarly, voices can magically appear on the PAN through Web/HTML requests, and converted to the local PAN format by the Netifier.

An Android app to control the Netifier is next, with thoughts of using a smart phone to insert inappropriate comments into the table conversation discretely, as in, say, seances or banned games.

The PAN management box outside and inside
PANdora Box closed and open.png (436.64 KiB) Viewed 1069 times

The manic doorbell, on the left, and the snarky oven on the right with warning label "Caution. Oven can be somewhat condescending"
manic depressive doorbell and snarky oven.png (321.42 KiB) Viewed 1069 times 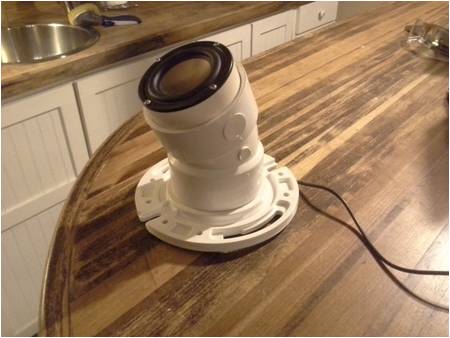 Many of these playback-only units are placed around the house, and therefore must be inexpensive and easy to build, as well as self-amplifying. PVC suits all of these purposes well, not to mention giving it a more noble purpose in life.
audio playback unit.jpg (24.48 KiB) Viewed 1069 times

Re: PANdora box summons talking spirits from the ether(net)

Blogged! Thanks for posting. Nice work!

Top
Locked
2 posts • Page 1 of 1
Please be positive and constructive with your questions and comments.