Please be positive and constructive with your questions and comments.
Locked
52 posts

I tested several components at hand for Q3 use. The ZVP3306A like in the kit, ZVP2110A a recommended replacement, and an IRF9520. This one would not be an easy fit on the board, but an excellent TO-220AB package that I have personally used. Also tested was, PN2907A with three different base resistors; 470R, 1K, and 10K. There are many great PNP's that would work the same. To test I used a simple proto breadboard to make all connections to components. MOSFETs and TRANSISTOR were connected to filament as a simple switch, just as in ICE TUBE circuit, current each part was able to conduct to filament was noted. Test voltage was 5.05 volts and test image shows a reading of 83.20 Milli amps on the meter, which is what this filament drew in current directly connected to source. Of note: I used a -5 volt gate voltage (ground) in test, kit voltage is more like 4.7 volts on the + rail; so a current loss of a few more milli amps is possible with a -4.7 gate potential. Since there was no logic on the gate of MOSFET (gate needs to be high or low, not left floating, so mosfet is either on or off) A 10k pullup resistor was used so MOSFET would turn back off and/or not float. So everyone is aware a low or ground level turns on a P channel MOSFET or PNP transistor. It's possible to be partially on for both, but in this case full on is desired. Just for comparison I tried an N channel MOSFET, which was connected instead through ground rail instead of Vcc. Very good result. 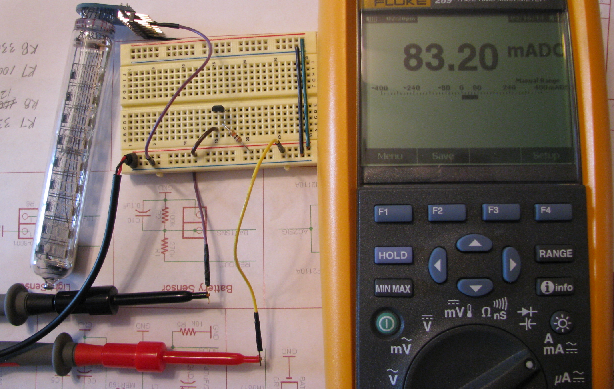 The chart shows each corresponding component. The ampere column shows how much current in milli amps each component was able to supply to filament. The 22 Ohm column is current with 22 ohm series resistor in circuit, as in kit. The grids and segments, I believe, pull about 22 milli amps from the filament. I don't know if this is exact evidence why the kit MOSFET has caused some problems. I don't know the exact minimum current flow through filament which would make the display inoperable, but this may help you decide which is best for your clock.

While it is common to connect N-Channel to the negative rail as you described, did you try connecting the N-Channel FET to the positive rail? I think it can be done by connecting the drain pin to the +rail and the source pin to the load. Drive the gate high instead of low. I have not had the time to look to see if I have a ZVN2110A around to try.

From the package size the IRF9520 it would not be a candidate for a substitute or replacement.
The ZVP2110A, the PN2907A with a 470 ohm (or 1K), would be good replacements or substitutes and I would also recommend replacing R3 with either 11 ohm or just a jumper.

The ZVN2110A (N-Channel) if it can be simply dropped in (in reverse of the silk screen) with only a firmware change that would be good for those who want to do so.
Top


Russell27 wrote: I don't know the exact minimum current flow through filament which would make the display inoperable, but this may help you decide which is best for your clock.

Frank_tt had the flaky segment problem that's affected so many users lately. He observed normal voltage on all Q3 pins, but an odd ripple in the power from Q3 to R3. By normal, I mean the voltages were normal given the ZVP3306A included in the Adafruit kit. Reversing Q3 restored Frank_tt's display but sleep no longer worked--presumably due to conduction through the Q3 body diode. Replacing Q3 with a ZVP2110A solved his problem.

Russell27 wrote:One other addition That might prove a worthy test is to jumper both sides of the 22 ohm resistor, eliminating it from the circuit.

The ZVP2110A should have an on-state resistance of around 8-10 ohms, so using an 11 ohm resistor in place of R3 gives a total resistance of around 20 ohms. Five volts with a 20 ohm resistor is how the filament was driven in the inGrid clock, on which the Ice Tube Clock was based. I'm not aware of any display issues with the inGrid clock, but that's not a kit and doesn't have the same level of testing. Even so, the inGrid design appears sound to me, so I rather like the idea of using a ZVP2110A and 11 ohm resistor instead of the Adafruit-provided parts for Q3 and R3.

I might shy away from using a jumper... At higher filament voltages, IV-18 tubes can exhibit a very noticeable brightness gradient. See this post for a description of my testing and a picture of the gradient at five volts. The only way to avoid a significant gradient with direct current is to deliberately drive the filament below spec. Unfortunately the voltages that eliminate both the dim digit problem and any discernible brightness gradient have a rather narrow range. To make matters worse, the exact range differs depending on the particular IV-18 tube. But driving the filament with around 3.5 volts, or approximately 5 volts with 20 ohms of in-series resistance, should eliminate the dim digit issue on nearly all tubes--and maybe even all of them. For the Ice Tube Clock, many tubes would exhibit a discernible brightness gradient at lower brightness settings, but I don't think the gradient would be too obvious unless someone examined the display carefully.
Top

I tried N channel connected to + rail with unsatisfactory results. JFET I used was also was unsatisfactory. Results I had written down from an earlier test, the MAXIM 6921 drew less than 2 Ma. The gradient issue is a matter of personal taste and even tube personality. By jumpering these parts out with a test clip, result can be verified with out making any circuit changes. For example, if the ZVP3306A does not work satisfactorily with the 22 ohm resistor, jumping the 22R resistor out of the circuit could add the extra current needed for display to behave properly, with no gradient. This example would be similar to using the ZVP2110A with a resistor, from the chart results anyway. At some point, because of voltage potential and current flow, there's probably not enough electrons boiling off the filament, floating around to be collected by the grid and segments to make the tube function properly.
Top

I was having some issues with my display and as jarchie suggested, I am going to try swapping the defective Q3 from the kit with a ZVP2110A. Now after reading this thread, is it necessary to also change out the R3 from the 22 ohm included in the kit to an 11 ohm?
Top

Probably not. On nearly all clocks, simply upgrading to a ZVP2110A is sufficient to eliminate any dim digits, yet not introduce noticeable brightness gradient. If the final or initial digit seems a bit dimmer than the others after installing the ZVP2110A--which isn't likely--then you could probably even out the brightness by using an 11 ohm resistor in place of R3.
Top

I stayed away from a jumper as I found that 11 ohms worked well with no real gradient across the tube. I agree that it is likely unnecessary to change R3 from 22 ohm to 11 ohm if using a ZVP2110A FET and that using a jumper with the ZVP2110A may result in a brightness gradient as John mentioned. The jumper might work best in some combinations such as with a ZVP3306A and has been mentioned before by others as an acceptable mod in some cases so I included it. I should have expanded what I said to better reflect my thoughts. Also as Russell has said, some minor variation in clock tube brightness adds some charm and individuality to each clock.


I tried N channel connected to + rail with unsatisfactory results.

I did find a ZVN2110A in my parts bin and did a quick test with an Arduino digital output, a LED,and a couple resistors, which connected as shown seemed to work ok. Resistor R2 is there to keep the gate from floating if there is no input on the test breadboard. 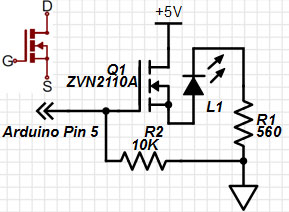 Provided it would work in the clock at all, it won't work unless the gate (from pin 5, VFDPWR) is driven high when the display needs to be on and driven low when it needs to be off. In the clock the gate is pulled low to turn on the P-Channel FET so a firmware change would be needed to drive the gate high.

It is my understanding the clock firmware on GitHub is not what is actually being used in the clock, but regardless, I don't know where in the code or how to make the gate go high so I can't test it in a clock. Same goes for the Johns firmware; I don't know where to make the correct mod when it is used with an Adafruit clock to reverse the operation of the pin.


Something interesting with Johns firmware on an Adafruit clock (ZVP2110A/11 ohm, & auto dim parts) board, the digit brightness at really low brightness level (clock in dark room) is even. Where on John's Rev D clock (also auto dim parts, tube drive to spec) board the digit brightness level at low brightness (in a dark room) is uneven with the rightmost seconds digit being noticeably dimmer. I don't care about the difference, but thought I would mention it.
Last edited by phild13 on Wed Mar 19, 2014 12:48 am, edited 1 time in total.
Top

PhilD13 wrote:I stayed away from a jumper as I found that 11 ohms worked well with no real gradient across the tube.

I haven't seen that before and wonder what the cause is on the Rev D board. Have you ruled out tube-to-tube variation? The side boards on both designs should be pin compatible...

By the way, the software and hardware that Phil and I are referring to is from my xmas-icetube project.
Top

No, I have not tried different tubes yet. All the tube boards I have are compatible with each design I have around. The tube that is in it exhibits even brightness otherwise, but I will swap it with a couple others this week and see if it is just the one tube or if more than one exhibits the same issue. I'll let you know.
Top

That would be wonderful, if you have the time. Thanks, Phil.
Top

Did you try jumping the 22R without a jumped ZVP3306A, to see if display would function? I ordered a few MOSFETs to try that should have turn on similar to transistor.
Top

Russell 27 wrote:Did you try jumping the 22R without a jumped ZVP3306A, to see if display would function? I ordered a few MOSFETs to try that should have turn on similar to transistor.

Jumpering R3 might work. But the alternative--replacing Q3 with a ZVP2110A--has already been tried by a handful of users with the flaky segment problem and has always worked. I think the all-eights problem and flaky segment problem are the same, despite the difference in symptoms. Jumpering R3 would be an interesting thing to try, but I'd recommend going with the more tested solution... just my opinion.

Russell, to see how low voltage/current affects the IV-18 tubes, try connecting all segments and grids to +12. Then adjust the voltage across the filament from 5 volts to 0 volts. I think you'll be able to replicate the dim digit problem, but not the flaky segment problem. I've done this on a few tubes and the general results were similar, but difficult to photograph.
Top

Ah, I misinterpreted your comment as a suggestion to fix the display. My apologies.
Top
Locked
52 posts
Please be positive and constructive with your questions and comments.