Forum rules
If you're posting code, please make sure your code does not include your Adafruit IO Active Key or WiFi network credentials.
Post Reply
122 posts

A board I would like to see you add: A Feather wing with a MOSFET for driving much larger voltages — maybe a 12v siren ~~1 Amp
Top

I'd love another attribute for each feed data value called "colour" (or "color" if you must). Then I could have a graph change colour if it went above or below a certain value. Important updates on a feed could be in red. There could be a colourchange command in triggers so I could make a slider automatically change colour if it went above a threshold. So many possibilities...
Top

An iOS app which lets us assign a dashboard as an iOS widget. That way, we could monitor and control our IoT devices directly from the lock screen!
Top

First of all, the work that the team is doing around Adafruit IO is awesome- there's nothing like it for hobbyists and small businesses. AIO is also extremely friendly to use compared to other services, and it's not only because of the awesome code, but the detailed guides that give people working examples.

With that said, here are some suggestions:
-Smaller display elements to let us make more dense dashboards. Examples include label-free elements where you can mouse-over and see a label, but none is shown by default. This should allow for graphical elements to scale smaller.
-Smaller display elements like a thermometer, where all that's needed is if a temperature or gauge is above, below, or within limits. It could be a simple column bar with the same color elements as the gauge.
-Spacing elements- bars, dividers, and spaces to allow for visual breakup without just leaving a gap.
-The ability to embed an element in a different website/page, with a clickthough URL back to a dashboard. This would let me show off a metric without someone having to leave the page they're reading.
-Probably already requested somewhere else, but the ability to manually set element colors like the bar colors or text color. This helps align with the embedding request above.

Bug fixes
-When a dashboard is made public, it makes the feeds public too as expected, but the icon for those feeds still shows the lock. The feeds are public as expected though.
-When using very high resolution displays like 4K monitors, the layout goes a little crazy on very wide displays, moving around elements rather unpredictably.
Top

You may want to check out this guide:
https://learn.adafruit.com/adafruit-io- ... ty-monitor
Top

I don't think this is possible currently, and removing a lot of them one-by-one via the website or programmatically quickly gets you throttled for too much activity. A feed that used to be a test feed might become a "production" feed and it'd be nice to just clear out old (possibly irrelevant or incompatible data) rather than delete the feed and create a new one (which I believe removes the associated dashboard widget and forces you to create a new widget, reconfigure its settings, and reposition it on the dashboard). If you don't want to allow it programmatically, at least facilitate it while logged into the IO website.
Top

It would be great to have a version of the AirLift ESP32 coprocessor board (product 4201) with the U.FL external antenna connector. My project requires that all electronics be shielded in a metal box because it's right next to an electrically noisy high-current multi-kilowatt generator transfer switch.

But thanks to Adafruit's posting of the CAD design files, I had a workaround. I ordered blank boards ($9 for 5 boards from JLCPCB), and all the components from Mouser including the external antenna version of the ESP. Soldering (manually, with paste and a hot-air rework station) pushed my assembly skills to the limit, but it works fine. I also had to flash it with the Adafruit firmware because I'm using WiFiNINA library. (That library, incidentally, has a raft of problems for high-reliability real-time systems, but that would be the subject for a different post.)

Photo attached; sorry it's blurry on the left side.

No, I'm not accepting orders... 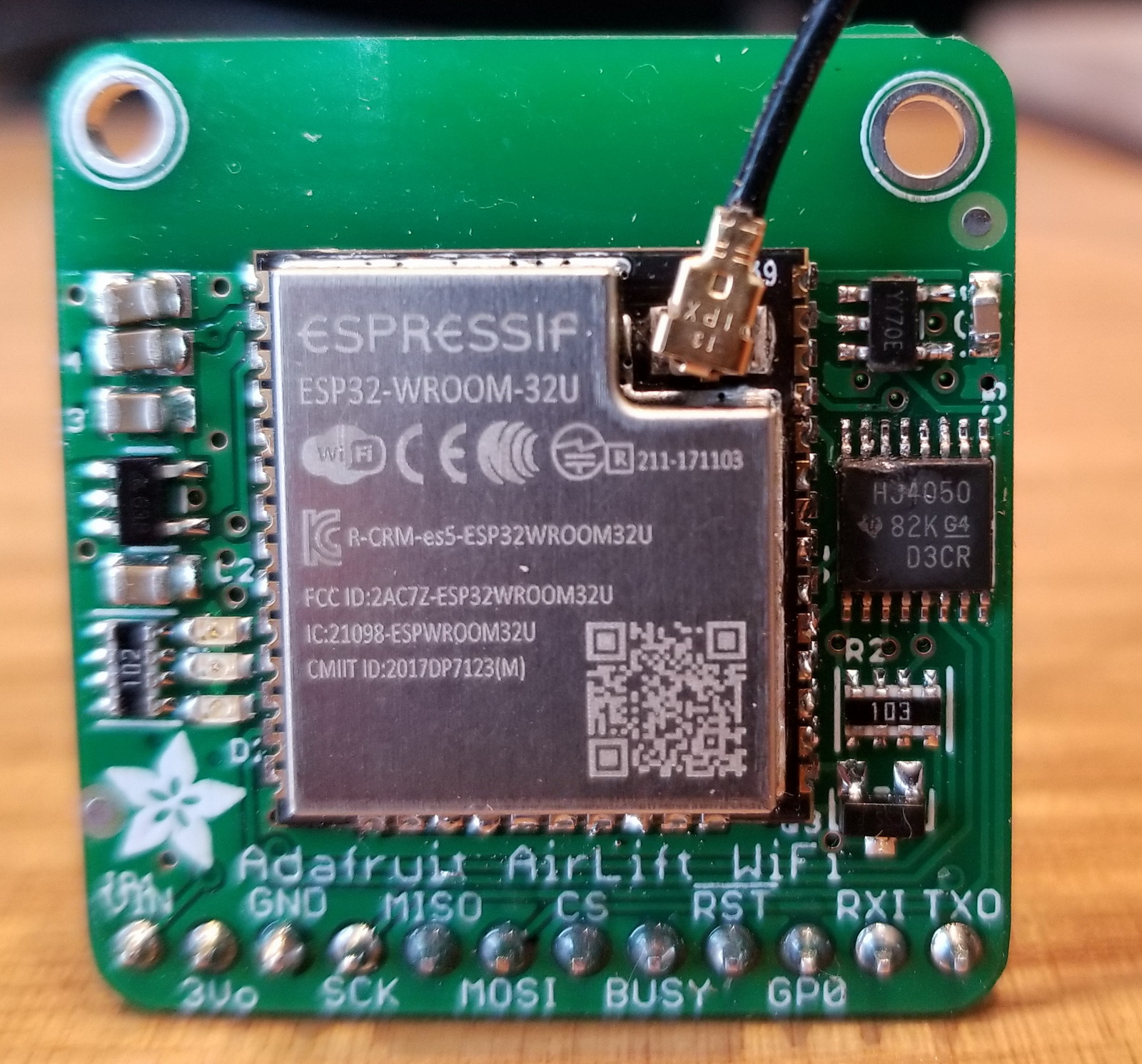 (That library, incidentally, has a raft of problems for high-reliability real-time systems, but that would be the subject for a different post.)

I'm very interested in hearing the issues you've had with nina-fw and WiFi-nina. Could you make another post (in this forum)?
Top

I'm very interested in hearing the issues you've had with nina-fw and WiFi-nina. Could you make another post (in this forum)?

Ok, here are a few notes of difficulties I've had in getting Airlift to work in a realtime control system. I don't know which of these are issues with the WiFiNINA library running on the Arduino (Teensy 3.5 in my case) and which are problems with the firmware in the ESP32.

- Calls to client.write() are unreliable for large transfers. You need to break them into small (500 byte?) chunks and delay some magic amount (10 msec?) between sends. Otherwise it returns "0 bytes sent" and terminates the connection. See viewtopic.php?f=63&t=155097.

- As a server it won't accept two simultaneous TCP connections on different source ports from the same client, which is what the Chrome browser routinely does in order to pipeline image transfers. See https://arduino.stackexchange.com/quest ... ions/68231

- After a successful connection with WiFi.begin(), you have to delay some magic amount (250 msec seems to work most of the time, 100 msec doesn't) before attempting any operations.

- WiFi.begin() (and maybe other calls?) are blocking and can delay for as long as 60 seconds before returning, which makes it impossible for other processing to be going on in the meantime unless it is interrupt-driven. It could instead return a "busy" status (maybe WL_IDLE_STATUS) so that WiFi.status() can be polled to determine when the long-duration request is done.

- There are some internal error states -- I don't understand them well enough to be specific -- where the only way to make progress is by resetting the chip using the RST line.

There might be a couple of others that I'll remember at some point...
Top

I want to know how to run a digital relay from a phone to a Bluetooth speaker to another device to make it vibrate.
Top

The ability to copy the full screen dashboard view as a URL.

I can see how to do this but would be really nice for making display panels such as using a raspberry pi, running a browser in a Kiso mode.

Along with this it would be nice to be able to create a "Block" that is just a button link to another dashboard.

My example is I have feeds coming from fish tanks of temperature, time, lights, etc.

The main dashboard simply displays status and alarms. but a second dashboard I am creating can turn off and on lights and change schedules. IT would be nice on my Pi which has a touch screen to have it display all the tanks temps, but be able to click through to the setting dashboard to make changes.

If you could copy the "full screen" link for a dashboard and link between dashboard, it would make it really straightforward to create basic control / monitoring platforms out of the box.

OH i forgot to say this is a great site and really simplifies things for people not wanted to get caught up in the details of setting up messaging services and dashboards from scratch.
Top
Post Reply
122 posts
Forum rules
If you're posting code, please make sure your code does not include your Adafruit IO Active Key or WiFi network credentials.