Forum rules
If you're posting code, please make sure your code does not include your Adafruit IO Active Key or WiFi network credentials.
Locked
121 posts

I have a feature request - could you add a search bar on the Dashboards page, just like the one on the feeds page?
Top

travswim wrote:There seems to be display issues when you open the navigation menu on mobile (3 line hamburger icon top left), the menu options do not display. I believe it should be: Profile, Feeds, Dashboards, Triggers, Services, My Key. See attachments: https://photos.app.goo.gl/a8X6TXvPaPBRHx3t7

Otherwise the desktop experience is great so far, no issues

This is now fixed. Thank you for bringing it to our attention!

Glad it helped. Also, when at the adafruit.com home page, the Adafruit IO tab is missing at the top for mobile. It is visible for desktop. See attachments: https://photos.app.goo.gl/6RL7ow5GMbPu8s6x8
Top

Perhaps it is nostalgia now, but I was pretty used to the old look. I guess I don't have that much of an issue with the graphical changes, but I'm not a fan of the new colors. To me the green looks a bit too yellow at first glance. A couple of times I've kind of gotten a jolt when I thought my gauge had turned yellow when it was just the new green. I agree with another comment made before me that if the colors are going to be changing perhaps they could be user editable. That would certainly address my color concerns.
Last edited by klif on Wed Nov 11, 2020 7:38 pm, edited 1 time in total.
Top

- On my desktop, the little trolley icon in the top right shows 0 items. On my mobile, it shows 7, despite it actually being empty. I can reproduce this on the desktop just by making the window narrower until it switches to the mobile layout

- In a maximised window on the desktop (Safari or Chrome), black bars are visible on left and right of the dashboard to keep it symmetrical. If I switch to full screen, it shifts to the left with a big bar on the right, which isn't ideal. If I press Esc to go back to window mode, the layout is completely screwed, with stretched graphs and the bottom controls (Get Help, Learn, Twitter, Facebook etc) overlaid on the dashboard. I have to refresh or change zoom to force a redraw
Top

cjdshaw wrote:When clicking "Settings" on an public dashboard, the settings seem to appear behind the blocks so aren't adjustable

I'm not able to reproduce this issue. What browser are you using?

This occurs on Chrome or Safari on Mac OSX. Try this sample dashboard
https://io.adafruit.com/cjdshaw/dashboards/test

Creating that dashboard made the feed public for you, by the way, but it still has the lock symbol in the Feeds list. If I look at its properties, it's definitely public. Dangerous. If I edit its Privacy, even without doing anything, that makes the padlock symbol go away

Thanks for all the hard work on IO, it is such a great service. Even the free version is so useful! Here's some feedback about the new UI (just my own experiences, take from it what you will!):

1. The rounded ends of the gauge widgets seem a little "web 2.0" aka old fashioned, but that's just me. More importantly, it's difficult to judge where exactly the gauge is indicating when the filled-in section has a rounded endcap--do you read off the centerpoint of the rounded endcap or the edge of the endcap? I know that the gauge is meant to be read off the centerpoint, but a sharp line could probably be more precise. For example, the value below is under the warning limit of 6 despite actually shading in past the 6 tick mark. 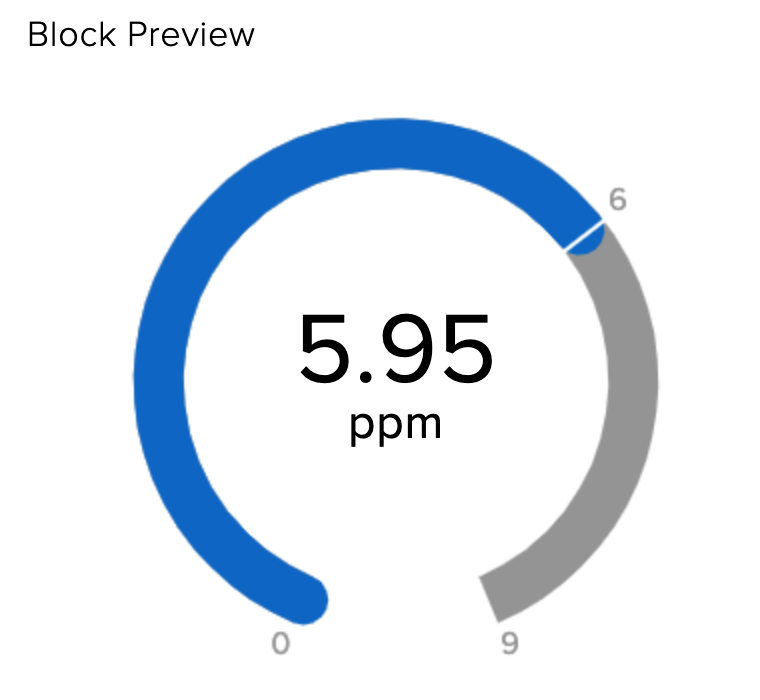 2. Visible in the screenshot above, the configuration tool for a gauge widget shows a square endcap instead of rounded on the rightmost grey edge.

4. In light mode, the gridlines of the charts show up as black and are very apparent. It is difficult to read the traces on the chart because the grids are such high contrast. Maybe a lower contrast grey a la the dark mode charts?

5. In light mode, the stream widget seems to still display white text despite having a white background. The text is visible only when highlighting it as shown in the below screenshot.

6. When adding a new block, all the block preview images show the old UI.

Keep up the hard work! (I agree with some others that the blue-on-black was a bit prettier the green-on-black, but I understand the high contrast requirement)
Top

As you make a desktop window narrower, there's an intermediate point where both the desktop menu and the mobile menu are shown. Also this shows my 0 items / 7 items in trolley issue

Disappointed that there's been an update which did not fix the map hours of history bug.
Top

On the plus side, it's still functional, if no longer very pleasant to look at...

Here are a couple of examples of what I'm talking about:

In my dashboard 1-hour and 24-hours spans in line chart are mixed up. See attachments.

chrispynz4 wrote:Disappointed that there's been an update which did not fix the map hours of history bug.

Could you explain this bug in detail, or link to this bug? I'll file an issue for it. Thanks!
Top

On the plus side, it's still functional, if no longer very pleasant to look at...

Here are a couple of examples of what I'm talking about:

The last two images are broken, could you please re-link/re-upload them?
Top

Changing the time scale for a graph forces the user to move it before the change can be finalized. This will disrupt layouts by forcing other elements to scatter when the graph moves.
Top
Locked
121 posts
Forum rules
If you're posting code, please make sure your code does not include your Adafruit IO Active Key or WiFi network credentials.