X0xmod an evolution of the X0xb0x

Please be positive and constructive with your questions and comments.
Post Reply
3 posts • Page 1 of 1

X0xmod an evolution of the X0xb0x

That's it, after quite some time this "little" evolution of the X0xb0x inspired by Brian BANNED's X0xio and other mods found on the Adafruit forum and elsewhere is finally functional in "V1" version.

Originally I wanted to redo an X0xi0 (I had already had the chance to build one), but the designer gave no more news (he left for other projects, among other things, a clone of the Obereheim VS1) and therefore no longer supplying the kits, I started like many others to modify the basic version of the X0xb0x.
It still took me a lot of time because with work, family life and the rest, it leaves little time for electronic design, especially since I'm not a basic electronics engineer but a nurse ^^.

Anyway, let's first go to the description of the added mods:
-2nd VCO with octave and cents adjustment
-a mixer to mix the two VCOs
-an overdrive filter
-an LFO with two-color LED for frequency and depth adjustment with outputs: VCO FM with choice of action on VCO1 or VCO2, Accent modulation and Frequency modulation for the VCF
-LFO out
-FM VCO in
-selection between 2 pole (12dB/oct) or 4 pole (24dB/oct) filter
-increased filter frequency range
-increased filter resonance range
-increased emphasis
- accent decay active
-an ADSR envelope
-2 buttons (normally more than one on future models) for infinite envelope trig
-adjustment of the bias of the VCA (BA6110) on the front to reduce the "plop" at the beginning of the note
-some transistors chosen for their strong hfe on certain parts of the circuit

Here are some pictures of the current versions with prototype version and near final version. Since these versions I have modified the original X0x PCBs to facilitate the installation of mods, without having to install them. On the PCB side of mods, some modifications were also made during the assembly of these versions in order to facilitate installation / connections between PCBs.

First the 1st prototype in a plexiglass box. 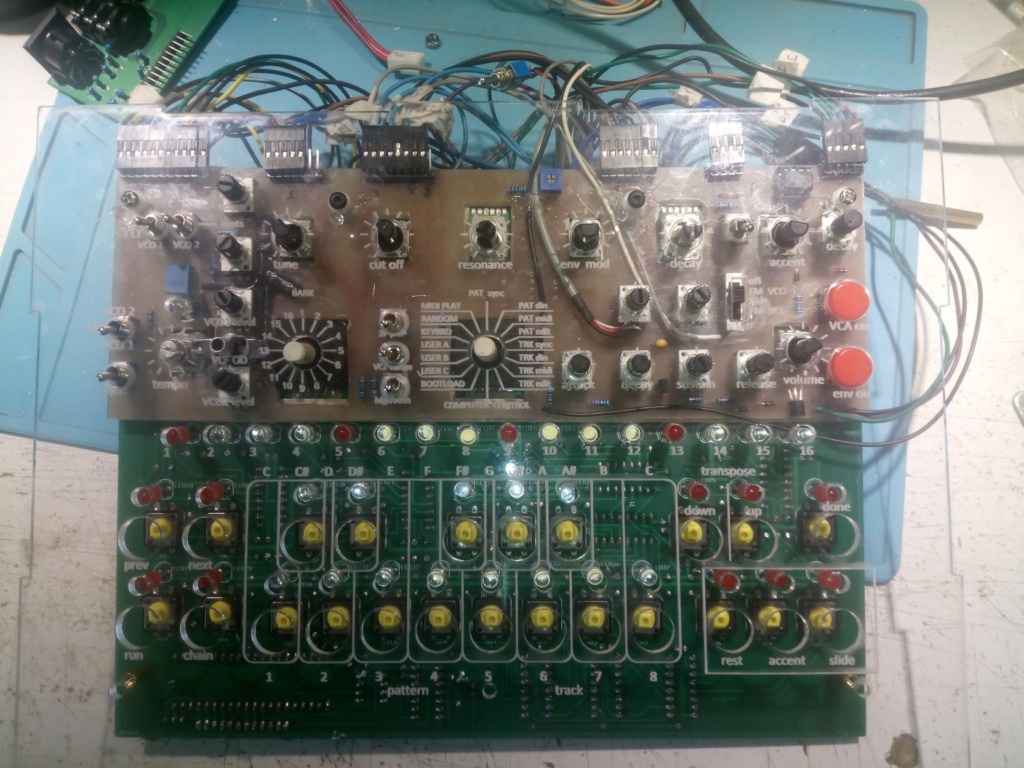 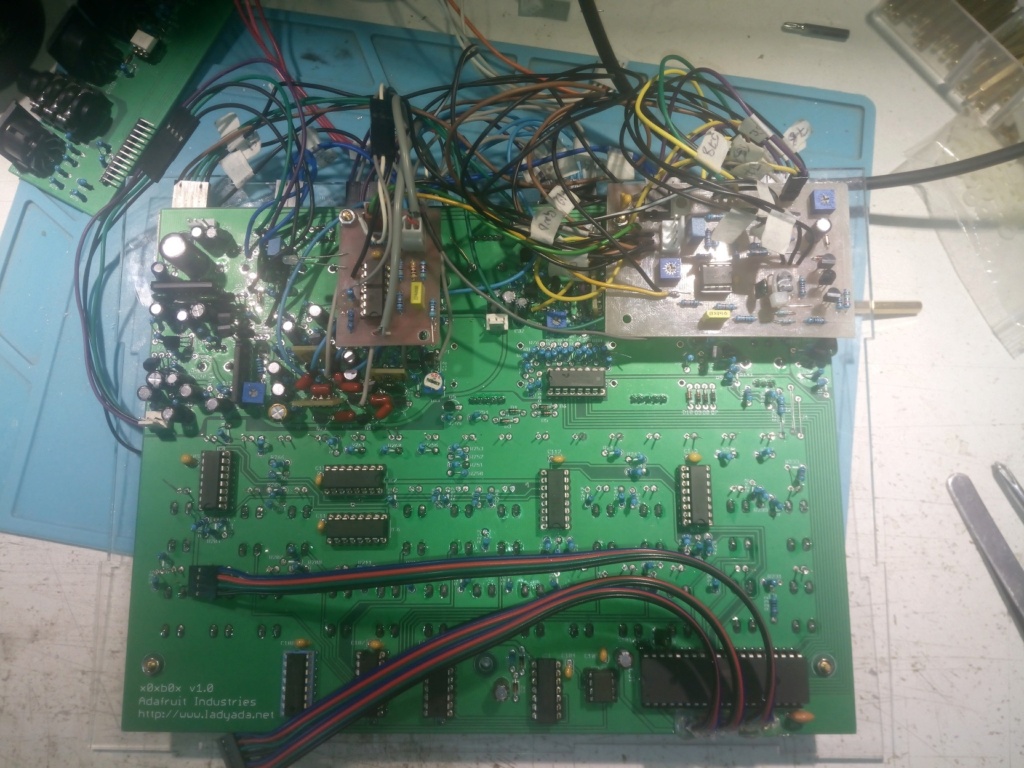 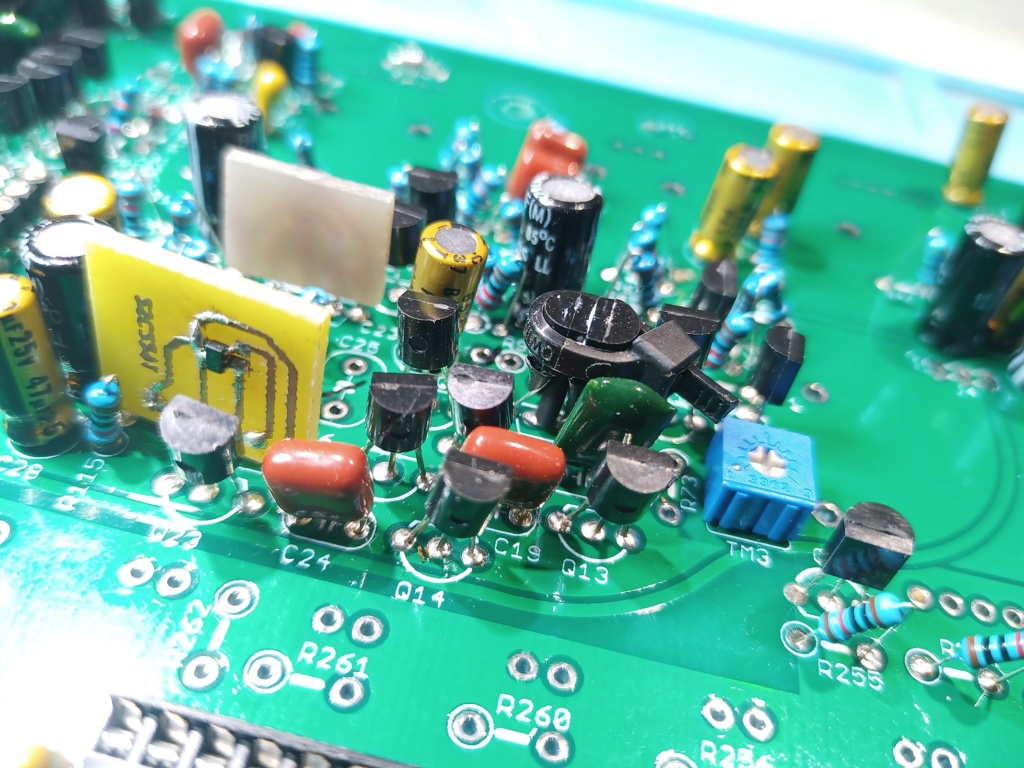 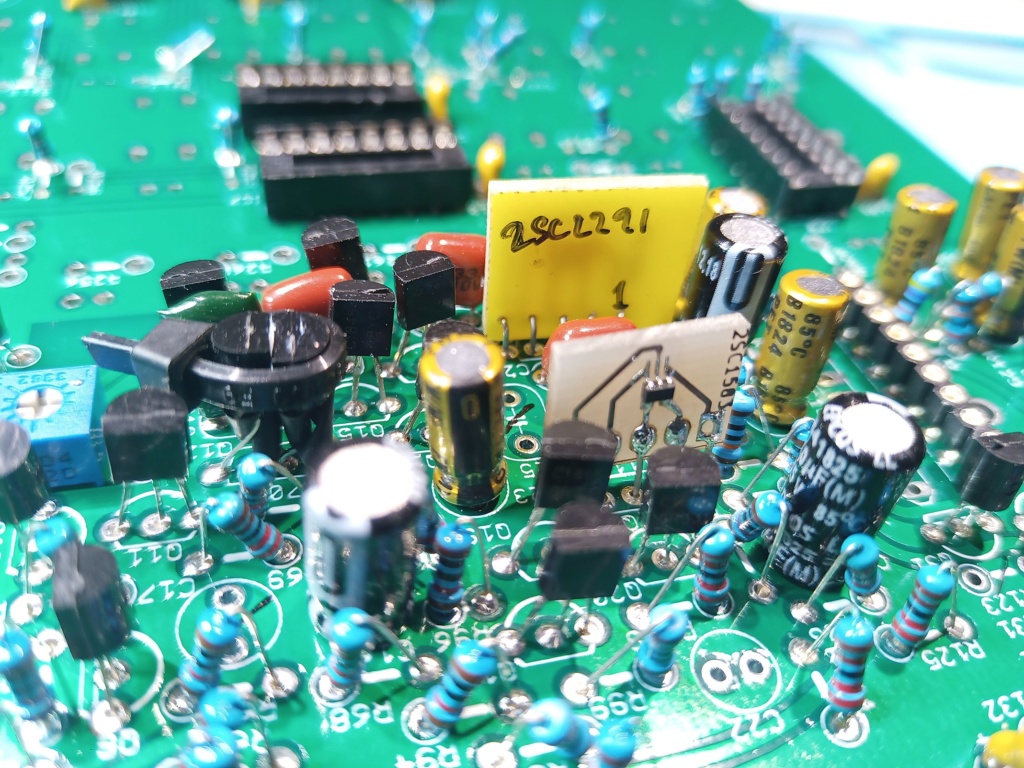 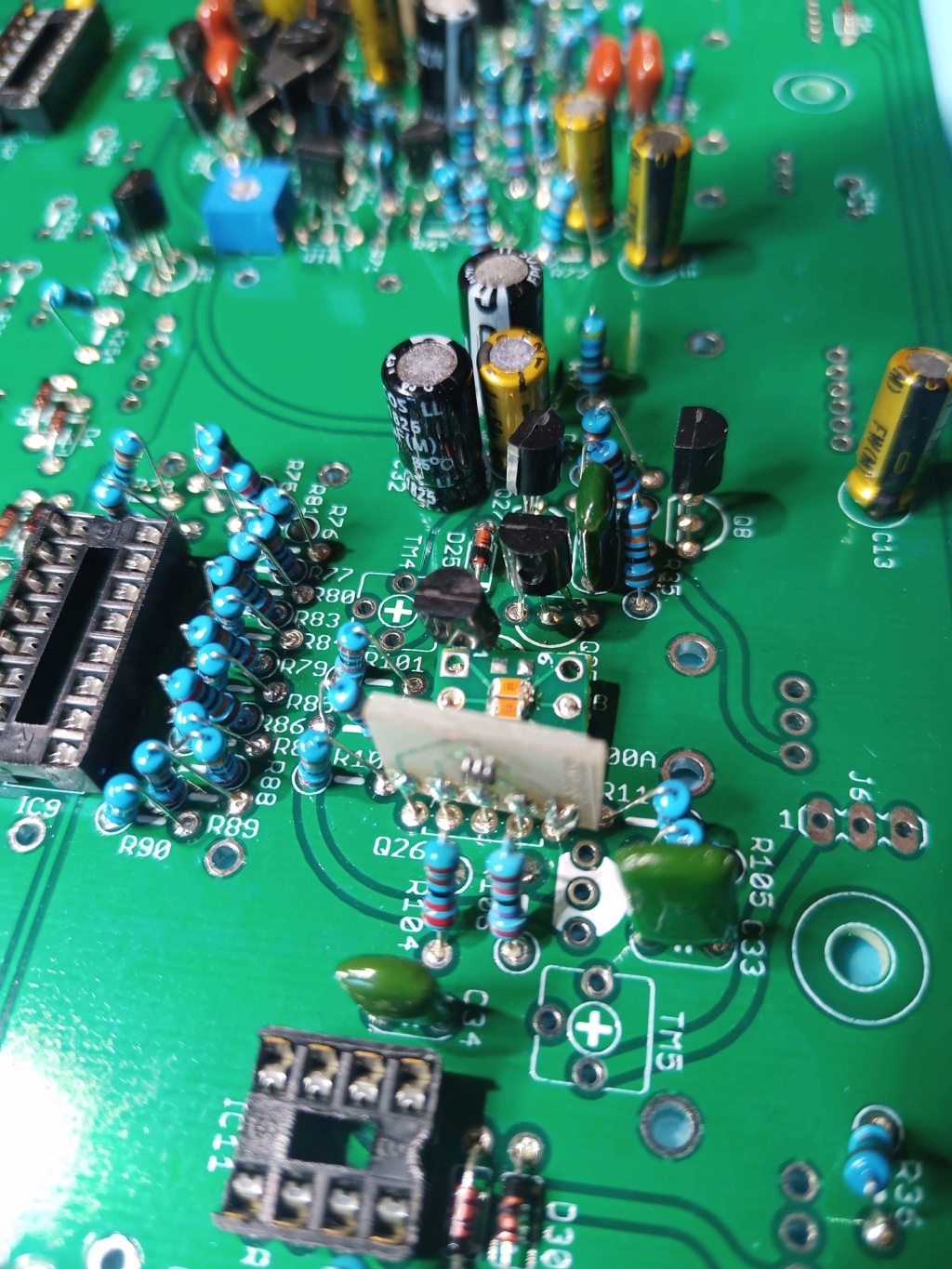 The latest versions in the original box of the X0x 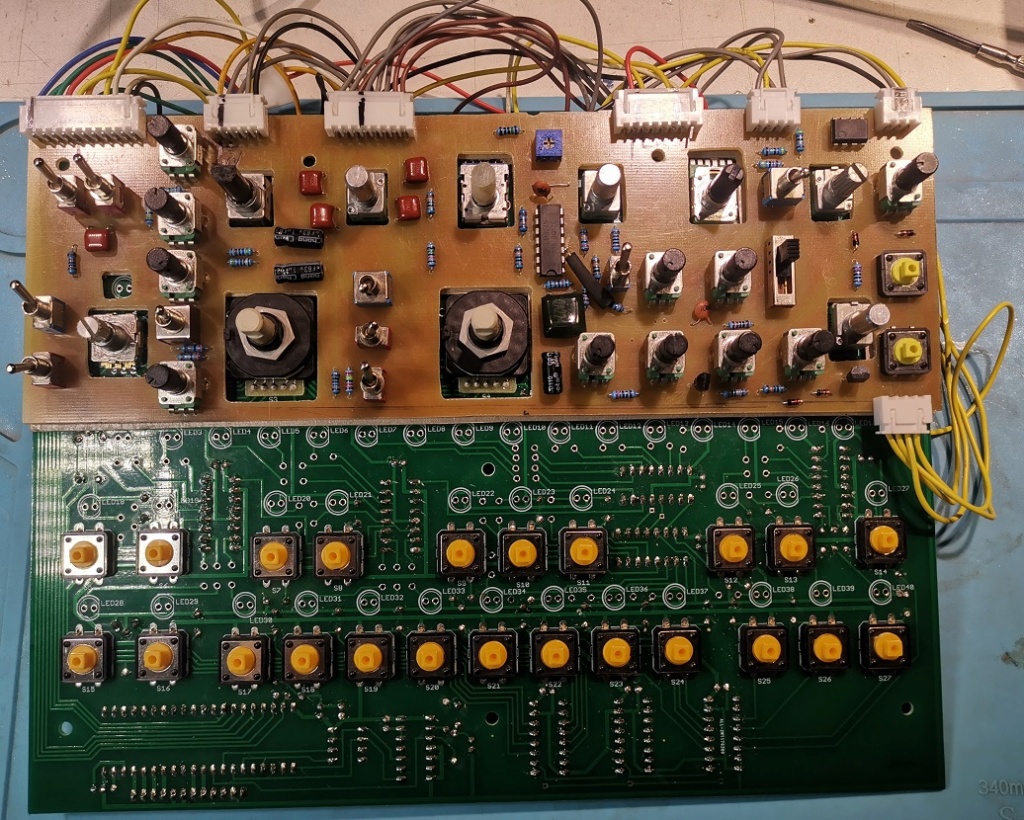 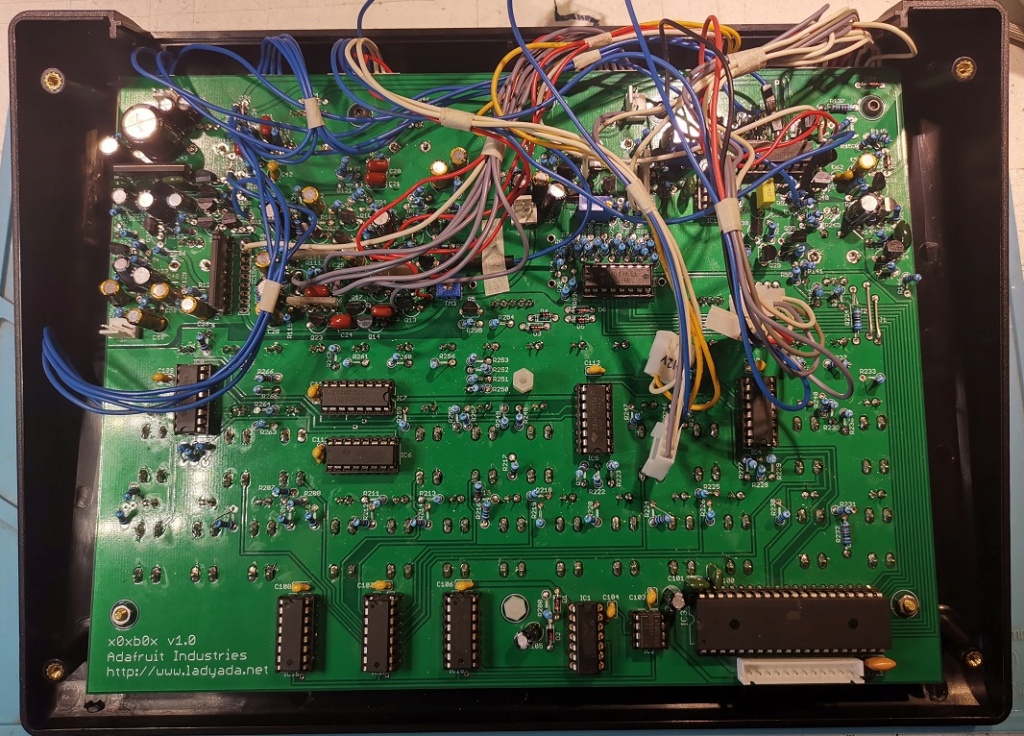 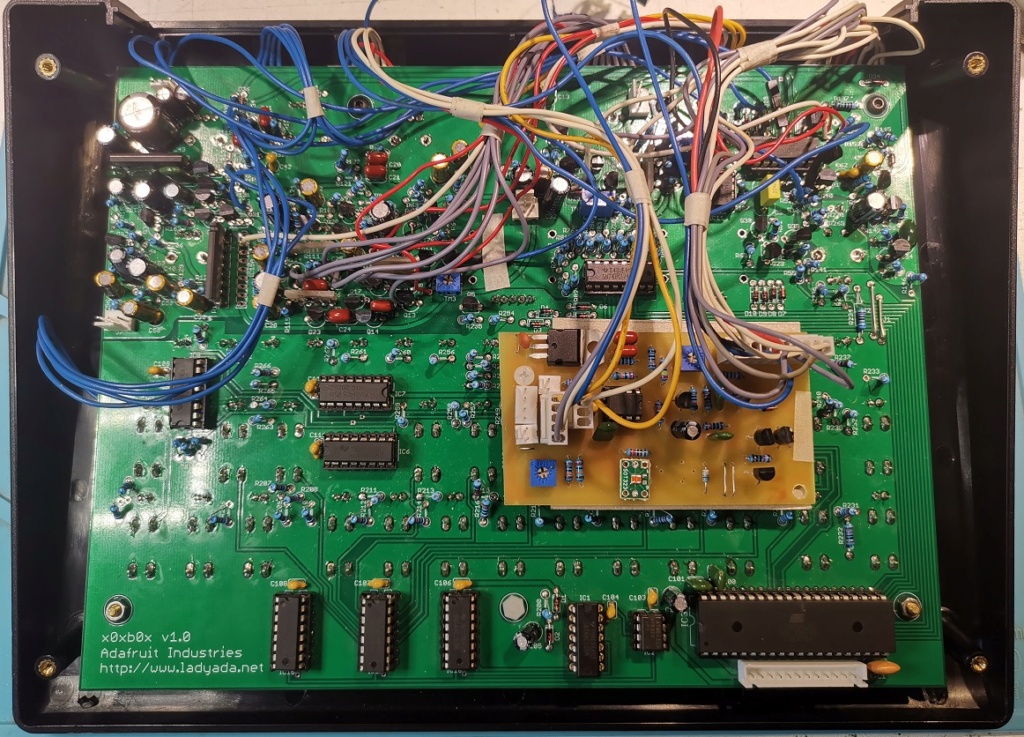 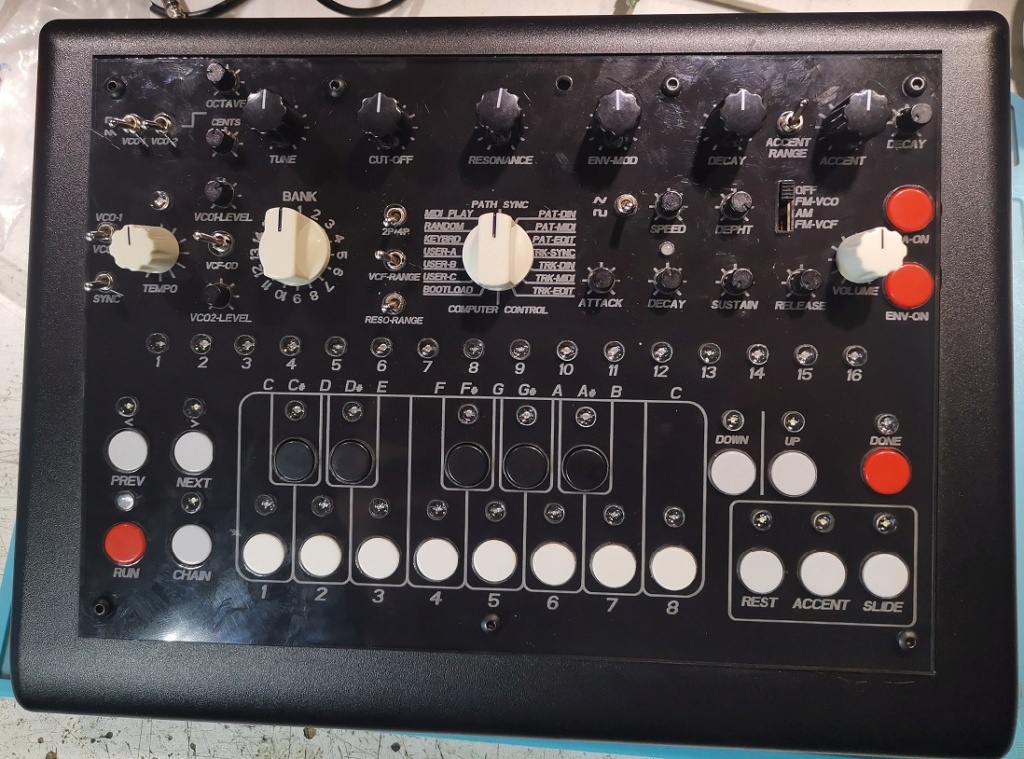 The photos of the factory PCBs manufactured by JLCPCB comprising the main X0xb0x and I/Oboard PCBs with modifications to facilitate the installation of mods, the two mod PCBs and small PCBs to supplement the 2SC1583 and 2SC2291 which have become almost impossible to find or out of use price. These PCBs allow two possibilities: to use NPN paired transistor boxes CMS PMP4201Y or to use NPN transistors paired manually with the refs found in the X0x such as the 2SC1815, the 2SC945 or the 2SC536.
After receiving these, I made a few minor modifications to some (writing, pad placement) and I coupled the paired CMS and NPN options on a single PCB. 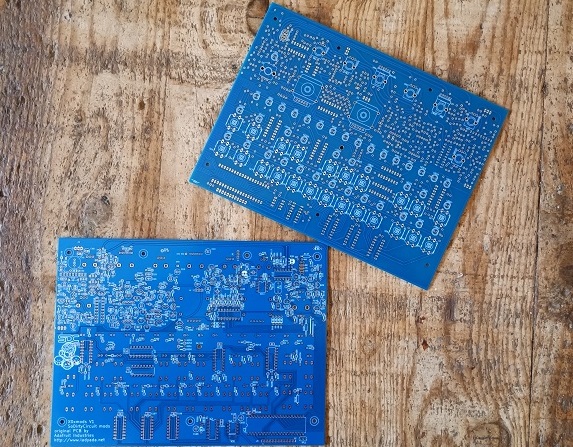 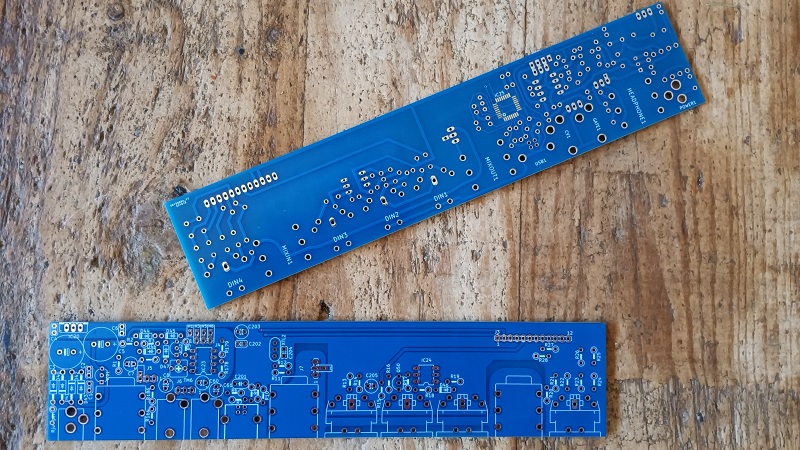 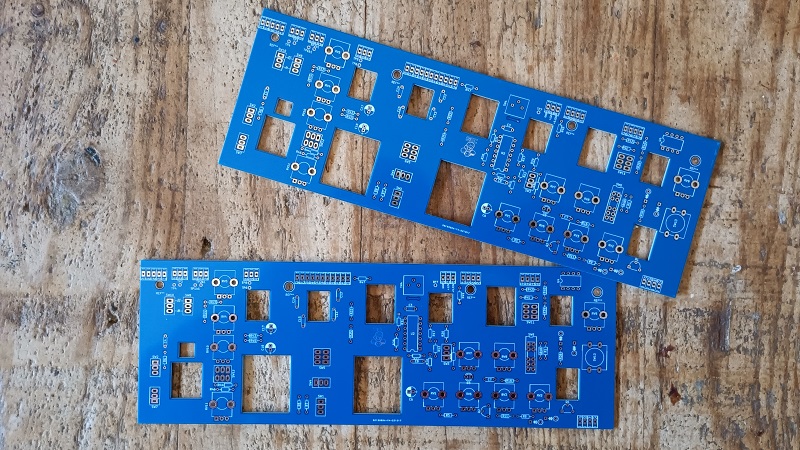 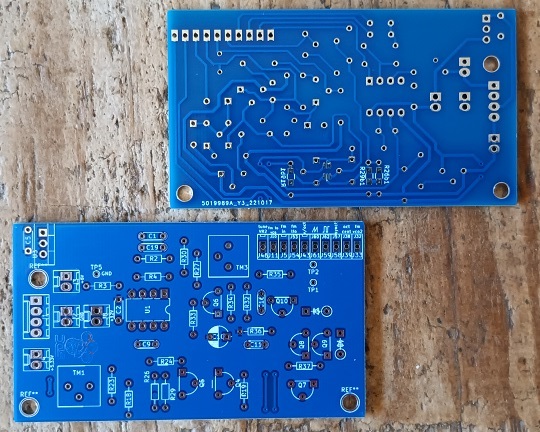 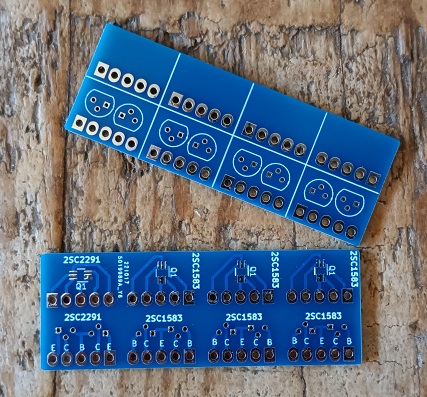 Some purists don't like the adaptation of the 2SC1583 and 2SC2291 because they change the sound of the filter.
I would say that already at the base the TB303 had several versions of transistors and that already between them, they did not sound the same, moreover this project is DIY, it is up to us to modify some of the components in order to change the color of the sound, because given the electronic design, this machine remains a bassline.
Regarding my version, in view of the mods, this little beast is now closer to a standard analog synthesizer which remains cheap but which could delight a certain number of musicians looking for a simple instrument but with a well-defined sound personality.

Some demo videos with the 1st prototype giving a rather vague idea of the possibility of the machine.
Be indulgent for the presentation I still have a lot of work to do on the commercial side and it is inf french ^^.

Regarding spare parts, all components can still be found through Mouser / Tayda (PT-10 box, knobs, PTC resistors, encoders) and other competitors for some a little particular and otherwise on different sites such as eBay or Ali for the rest.
On the other hand, I noticed an almost doubling of the prices of certain components.
Note that Adafruit continues to provide the original PCBs for the X0xb0x.

I'm in the process of creating a little editing tutorial for the mods which, if I can find the time, should be available by the end of the year.
If you have any questions do not hesitate.

Sorry in advance for my English (I'm French), I did a google translation and tried to correct the mistakes but there must be some left.


EDIT:
I'm going to have to make some more modifications on the main PCB of the X0x, I finally found pots to replace the Grayhil 25BL22H which cost a fortune, almost 10€ each, with ALPS EC18AGB20401 which costs 2.5€ each, but the pinout is different so I will see to modifying the footprints.
It was a bit the black point of the X0x these pots, expensive and rare, for the rest it's really basic component.
For the "rare" ones:
-the 2SK30AY FETs (the 2SK30AO versions are easily found) but which can be replaced by J201s by adapting the pinout (what I applied on the X0x PCB)
-the BA6110 easily found but sometimes we come across broken batches (personally I've never had the problem) an LM13600/13700 can also do the trick by adapting the pins (there will just be an unused OTA)
- the AN6562 can be replaced by LM358 without noticeable modification of the sound
-the 2SC1589 and 2SC2291 are therefore easily replaceable by paired NPNs
-for some PNP and NPN take a tester to choose with the strongest hfe for some parts of the circuit
- the NPN 2SC536, they can be replaced by 2SC945 or 2SC1815, these two other references having equipped the original TBs
-the 32Kb 25LC320 EEPROM (several refs) easier to find in CMS format than traversing (CMS modification made on the X0x PCB)
- there are still the PTC resistors in 3500ppm which remain expensive (between 0.6€ and 3€ each) and a little more difficult to find, for my part I am taken 1K in CMS on Mouser of the KOA speer brand (I I also applied modifications on the PCBs for the CMS option)

Re: X0xmod an evolution of the X0xb0x

Re: X0xmod an evolution of the X0xb0x

Some news: a friend try to modify the source code to adapte the EC18A from ALPS because this pot use "gray code" not the "hexadcimal/decimal" code like the 25LB22H.
We make the mod for the "bank" pot, but we have some bugs with the "function" pot.
If someone have a solution to this trouble we will be very happy ^^.

On the futur PCB I add a new option: I put a MISO/MOSI/SCK/RST/VCC/GND connector. With this connector we can upload OS with a AVR programmer, in the case where the USB/conb0x not work.
Top
Post Reply
3 posts • Page 1 of 1
Please be positive and constructive with your questions and comments.