Forum rules
If you're posting code, please make sure your code does not include your Adafruit IO Active Key or WiFi network credentials.
Locked
122 posts

Post any suggestions for new Adafruit IO features you would like to see. Be as detailed as possible on how it would work, and a diagram would likely be informative for us/others as well. Features can range from the platform itself, to the libraries, to suggestions about hardware you'd like to see us produce.


note: this thread does not cover Block suggestions. If you'd like to suggest a new block, post up here: viewtopic.php?f=56&t=130408
Top

I had created a "feed group" so I could keep different projects lumped together; I even added a member "query" in the hopes that if I changed "query", the contents of the entire feed group would be sent back, but no such luck.

I would like to be able to do things like
group->pull();
or
io->pull("feed");
The response would be to send the standard messages and my On-handlers would deal with it.

In searching for undocumented library features, I found in AdafruitIO_feed.cpp a method called lastValue. This looks like a solution if I were using simple feeds. Could AdafruitIO_Group get a similar function? As far as I can tell, all it needs to do is iterate through the group feeds and put the group name in the right place.
joe
Top

Assuming I'm understanding you correctly, we have that feature for feeds already via the get() method on Feed objects in the Adafruit_IO_Arduino library. It behaves pretty much exactly like you describe. If you subscribe to an MQTT feed topic, "username/feeds/something", publishing anything to "username/feeds/something/get" will force the most recent value for the feed to be sent to just that MQTT client. If you've set up an onMessage callback, it'll trigger your code in the same way as if your feed had a new value published.

At least, that seems to be what you're describing.

We're currently figuring out how to better document the MQTT API features since we also have some more in the pipeline. For now, feature announcements come via the blog, these forums, and discord.gg/adafruit.

The feature hasn't been deployed yet for groups, but should be in the next week or two.

lastValue uses the HTTP API, which is okay if you're comfortable polling for the last value, but doesn't play nicely with active MQTT connections.

flounder wrote:In searching for undocumented library features, I found in AdafruitIO_feed.cpp a method called lastValue. This looks like a solution if I were using simple feeds. Could AdafruitIO_Group get a similar function? As far as I can tell, all it needs to do is iterate through the group feeds and put the group name in the right place.
joe

Adam has added support in Adafruit IO for MQTT group /get. Thanks for inspiring this fix - if you find any issues with it, let us know!

HI, is there any way to white lable the Adafruit data feed and give it to my customers based on login criteria.
there are some websites doing that. and if we are a startup into IoT, who is in the stage of gathering customers, would love to use this feature.

Since, you guys have the platform ready, i guess it won't take much for you to modify and give white label access.
Some examples -
https://freeboard.io/

Thank you for listening (i mean, reading).
Top


If you're just hoping to share the data, you can build a tiny proxy server and republish it without giving away your API key. We don't have any restrictions on what you do with your data once you pull it off of IO.

Or are you asking specifically about public or semi-public white-labelled dashboards that you can share with your customers? It might help us understand if we knew more about your setup with respect to feeds and dashboards and how you're hoping to share Adafruit IO access with your users.

To be clear, IO wasn't designed with reselling in mind so you may find it requires more code on your end to provide fine-grained access to data. Moving from product prototype to commercial product may end up meaning moving to a platform built for that (AWS / Azure / Particle / etc.).

related: I checked out the freeboard.io site and they mentioned "Success Stories" for their white-labelled dashboards, but all the links were broken. Do you have an example page you know of?

Suggesting a way to do adjustment of data before storing it in the feed. Just an offset (negative or positive) to can be configured on a feed-level. Use-case would be to do offset on thermometers e.g. as a calibration when this is not possible on the device side.
Top

Another one - It would be a nice function to add a filter to the dashboards for getting smoother lines.
The feed data can be noisy but it would be nice with a smoother look at the dashboard when looking at the graphs.

Either median value that be configurable in digits or something else simple.
Top

Hey..
Am trying to control a nodemcu(ESP8266) with Adafruit IO server,I need to control it with python code from my pc is there any tutorial that is on this topic...?
Top

I'd like for triggers to be enhanced to allow you to add static parameters to the webhook request?

Specifically an "access_token" and value?

I'm integrating a Particle X enon with the Adafruit IO system. The Xeno n can't talk MQTT or REST, but I'm able to move data from the X enon through a publishing webhook from Particle. Now I want to be able to call functions (issue commands) on the Particle device from Adafruit's Trigger webhook.

Particle's Webhook has this type of extensibility. I've attached a screen cap. 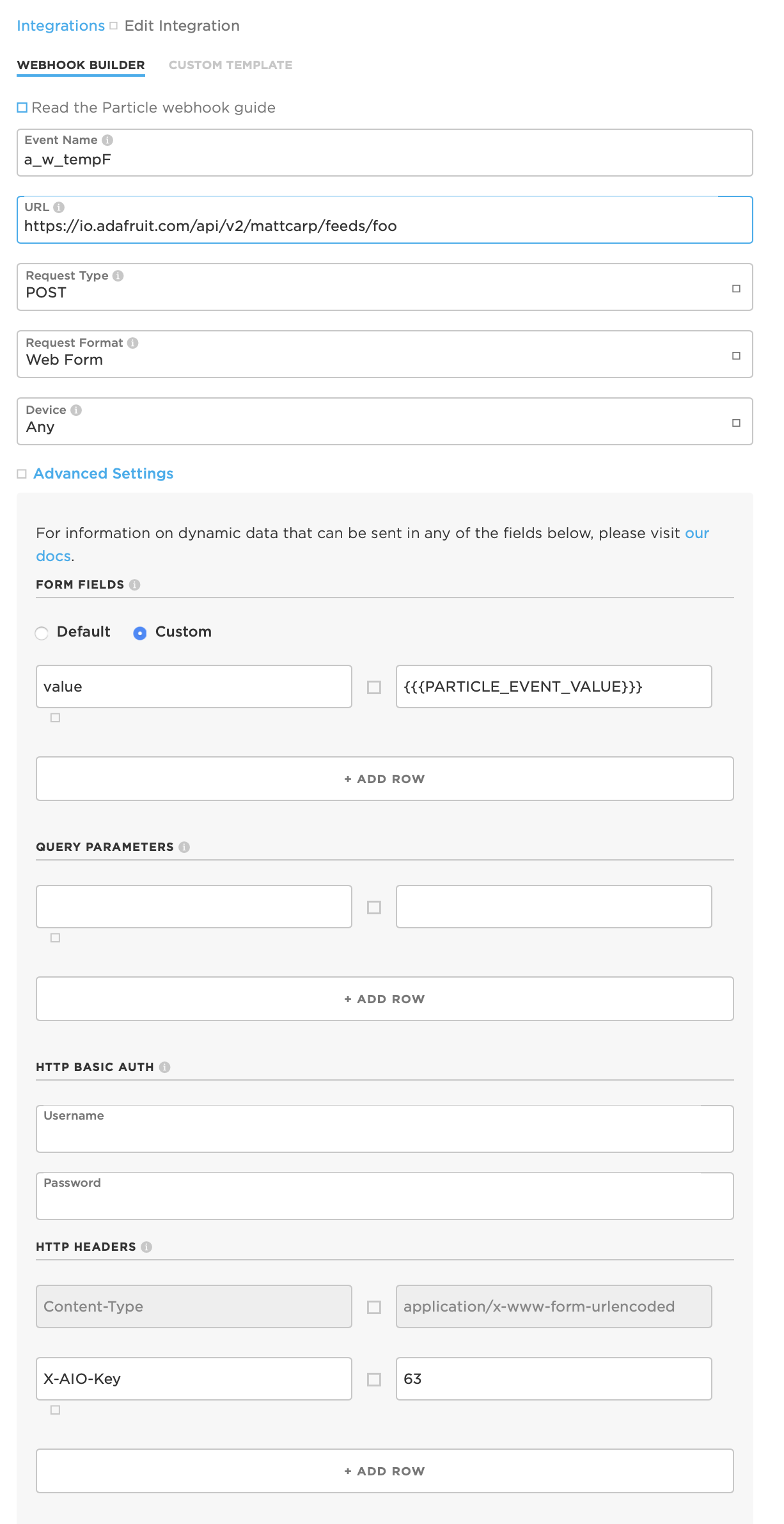 I understand why the service itself is a pay feature, but the documentation shouldn't be. Someone interested in weather data shouldn't have to pay for IO Plus to find out if it's worth paying for IO Plus!
Top

It would be nice if there was a way to have io.adafruit.com automatically convert values. I am making a weather station and send my temp data in Celsius. It would be nice if I didn't have to make a new feed to just have it convert that to Fahrenheit for one gauge.
Top

I would love to see the ability to annotate data points in the feed via the API as well as the online portal.
Top

I noticed that momentary buttons don not work the same way on mobile than on a computer. When I press and hold a button, on mobile it doesn't post to the feed at all. On desktop, it posts 1 when pressed and 0 when released.
Top
Locked
122 posts
Forum rules
If you're posting code, please make sure your code does not include your Adafruit IO Active Key or WiFi network credentials.