by benguild
The PowerBoost 1000 is a neat little board but it's producing an audible whine at about 8700Hz for me. (That's what I hear physically from the board) — I've tried a couple different power sources but it always seems to be there.

I've tried adding caps in various places to smooth the supply as well as RC filters on the input to the amp to try and kill the noise, but haven't had any luck so far. Any tips or ideas on how to work with the PowerBoost 1000? TIA

by adafruit_support_mike
The whine is probably microscopic flexing in the inductor or the SMT capacitors. It's something that happens in any circuit oscillating at audio frequencies and carrying enough current, and there isn't any way to prevent it. The amount of current the cap can push into the supply rail is limited by the op amp's output current. That will probably be in the 25-50mA range for most inexpensive op amps, but you can get a high-power amp or hook up a buffer if you want more power. Hopefully you won't need anything that drastic though. The LC filter should keep things pretty quiet.

by benguild
Hmm, so you're saying 4x 1000µF caps to ground, with 3x 100mH inductors between them? I'll have to give that a try!

The OpAmp compensating circuit seems cool, I'll also have to try that out on a breadboard here because I'm curious to measure the difference. Would it matter if you powered the IC with the pre-filtered rails, or the same filtered supply that it's trying to compensate for?

by benguild
Actually can I ask you about the inductors.... Given that the current rating for the PowerBoost is 1000mA+, what does the rating for each inductor need to be in this case? I mean, the Arduino Micro uses much less I'm sure.

Also, shielded vs. unshielded? They're going to be in close proximity but not touching.

The reason *to* do it is the same as using a smooth supply rail for any op amp: even if the PSRR is good, some small fraction of rail noise still gets through. Using the cleanest available rail gives you the best possible output.

by benguild
So I had this moment of silliness today when I was assembling the circuit where I realized I only had 1000µF polarized caps. Needless to say, the Micro didn't power up like that. 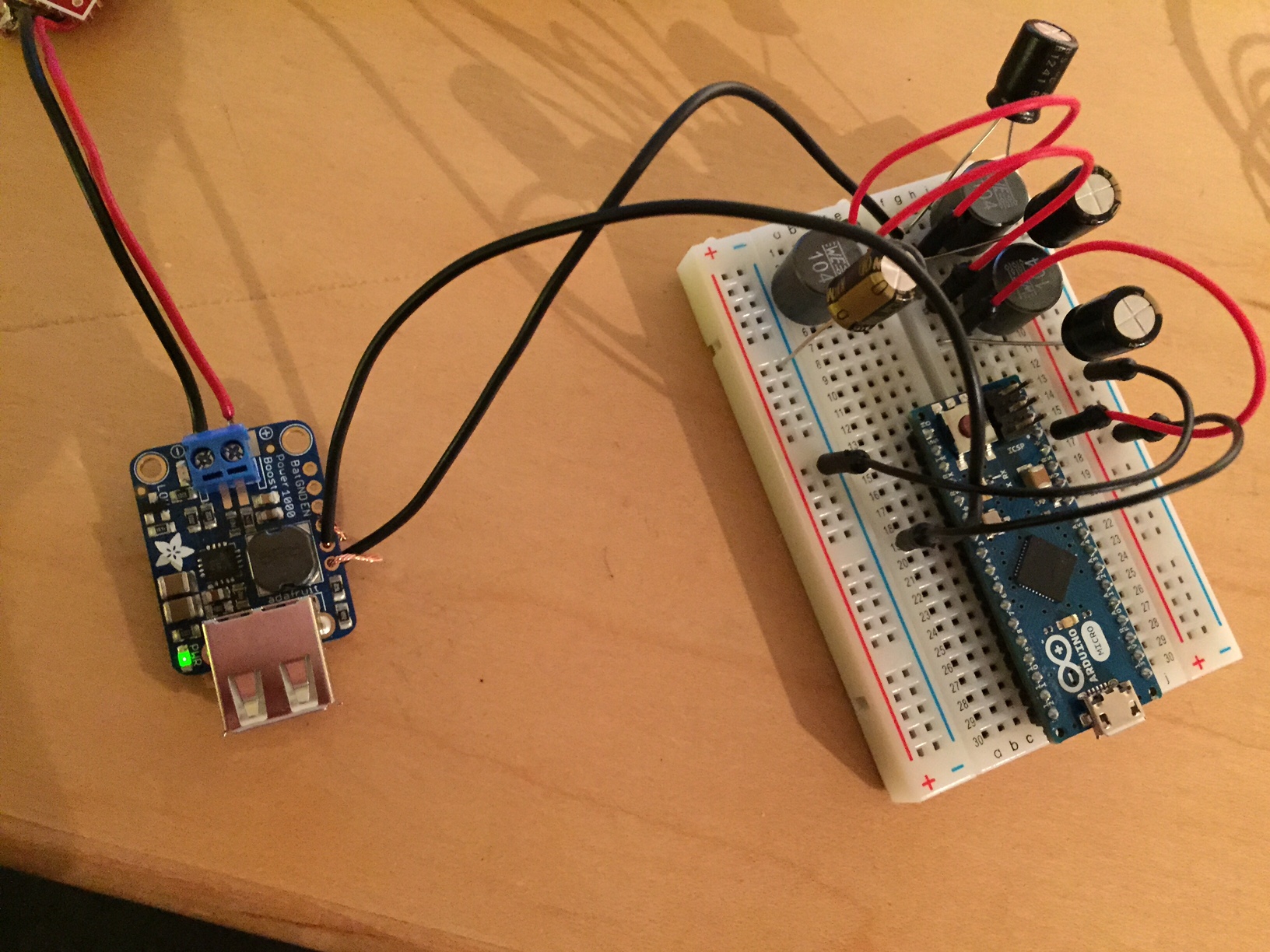 Is the 500 going to put out different noise on a different Hz given the different IC and different schematic, or do you think it'll be less noise, or mostly the same? Any recommendations based on these added details? I can order the other caps to here in a minute, but I'm not sure if it's going to work form factor wise since those are huge caps. Just trying to get it to work at all at the moment, though. — Really appreciate the thoughts so far, though. Thanks in advance.

by adafruit_support_mike
Hmm.. I didn't think about inrush current. Having to charge a few thousand microfarads of capacitance all at once would present a pretty big current load.

by benguild
I tried dropping the caps all the way to 0.1µF without luck. Board might boot but the power light strobes at a higher freq.

In the meantime, the PowerBoost 500 showed up and is less noisy but still too noisy. Any ideas?

by adafruit_support_mike
I'll have to build a version and poke around with my own scope.

In the meantime, how much current does your circuit actually use, and how much tolerance do you have on the ouput value of 5v?

by benguild
So, here's the thing.
I have a 3.3V source, and it puts out like ~100mA. All of the components use 3.3V except the Arduino Micro, which is why I have to ramp up to 5V and was playing with the PowerBoost ICs.

I had an Arduino Fio but the clockspeed was too slow. It did run on 3.3V though and everything worked fine. Just trying to figure out the missing pieces here really.

by benguild
Hey great news—
I messed around with the PowerBoost 500 and some different caps and I was able to get it working *and* quiet! I honestly couldn't be more thrilled right now.

by adafruit_support_mike
Glad to hear it!

There's much to be said for just trying different components and arrangements. ;-)

by BillMav
Hi, I have Powerboost 500 which is producing the high pitched noise. Can you post the setup of the working filter?

by ii
I think the noise should be listed in the product listing fore these:
http://forums.adafruit.com/viewtopic.php?f=22&p=366793
and suggested work arounds from adafruit.
I'm getting the same thing, and the pitch varies based on load.
I had a 500 and it had less noise... may need to switch back to them.
All times are UTC-04:00
Page 1 of 2